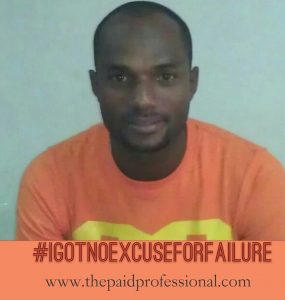 I’m writing this post as a tribute to a good friend, Late Michael Nandul Vongdip. A great friend and a man who thought there is no excuse for failure.

Michael had a will to win. When life pulls him down he gets up again. He faced his challenges headson without fear. He had big dreams which he believed he would achieve. But the cruel hands of death took him away before he could reap the fruits of his labour.

No matter how bad things get you can turn around and start again while you still have life.

The fact that you made a mistake is not a reason to stay there. Try again.

If you fail the first time you are not a failure, you are only a learner.

You might not know the value of time until you look at the events happening every second. Babies are born, people die, and marriages take place, happy moments, and sad ones too. It is a continuous wheel of never-ending activities called life.

Time waits for no man. If you have a dream, begin to live it. Conditions mustn’t be perfect before you begin. Start! Just do it!

I happen to see a spider spin its web on a certain evening and I loved the sight of it. I watched as the spider strategically made long strands of line here and there and mechanically connected line upon line of webs to form a fascinating construction. It was beautiful.

And then the magnificent construction was destroyed. But what did the spider do? By the next evening, the spider had built it again. Of course, it needs to survive.

What can we learn from this story? Life is like this spider spinning its web. You must keep spinning, starting all over to win if you want to survive. If a small spider can have it in its instinct to survive by not giving up on life, why can’t a human with all his brain power have that will to win?

Every day, we go out doing what we can to survive life’s coming challenges and build magnificent lives. Things work out and things will go bad sometimes too. But we build again.

Businesses fail, and they build again. Relationships go bad, and it can be built up again. Success is an intentional activity.

What makes life interesting is the daily challenges we overcome.

I got no excuse for failure. I have the will to win.

Late Micheal Nandul Vongdip, the general, the hustler, a great marketer, a go-getter, and the man with a beautiful smile. Micheal fights for what he believes in and doesn’t give up easily. He is popular for the hashtag igotnoexcuseforfailure on Facebook and Instagram.

If you never knew Mike, too bad, because you never had the chance to be charmed by his amazing personality. I know he has gone to the world beyond the skies but he left us with wonderful memories.

If you knew Mike, however brief it might be you would have noticed his charm. Mike was fondly called the general among his close friends because of his good organisational skills and he pays attention to details. He is always meticulous in his dressing and never downplay his good looks.

Mike hails from Langtang, in Plateau, Nigeria. Langtang is popular to be the hometown of several Generals in the army in Nigeria and Langtang people are traditionally warriors. No wonder, we see where Mike got his genes for being brave from.

I know we all miss Mike, and he left us with so many questions, but his #igotnoexcuseforfailure lives with us.